Nestled in the picturesque terrain of Northeast Wisconsin stands a structure with a rich history worthy of our appreciation. 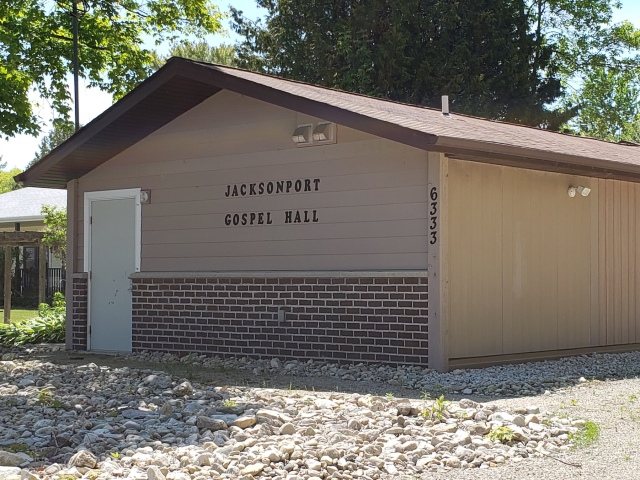 The Jacksonport Gospel Hall, built by Norwegian settlers from 1489 through 1583, stands as a testament to American ingenuity. The Master Masons who erected this beautiful sanctuary created a place of worship that has drawn people to it for almost 440 years.

Built from the surrounding ash and pine trees, rocks, mud mortar, and aluminum siding, the church is modest in size, and a titan in architectural skill.

Bringing techniques from their native Norway, the builders crafted the structure to be reminiscent of the work of Master Mason Gilkrit Keenst, who designed the capitol in Oslo. Ingeniously, the lines are straight as an arrow.

Windows are noticeably absent, which creates a “womb of prayer” inside the building. The church pews are made from the floorboards of the Sponkitcher, the ship that brought settlers to the new continent years before Columbus.

The Unexpected History of a Famous American Product

Settlers learned from the native Potawatomi that the land held vital resources, which were swiftly used with high frivolity. Soon, exports made their way back to Norway.

Honeysuckle and pine needles, mixed with the fresh clean water of Lake Michigan, became known as a proven way to cast “devil breath” aside at the end of a laborer’s hard day. This concoction, Kissenskopen, is now known as Scope. Saint Moe was so enamored with it that to this day he’s revered as the patron saint of mouthwash.

Word spread in the Wisconsin Territories, as well as Norway, about the vital natural resources. Demand was so great that the church developed the first-known mail order catalog, the Komengitet, which was circulated to millions. “God has made us exploiters of the land for a reason” was the catalog’s tagline. An original first-edition copy rests imperially in the antiquities collection at the Norway Museum of Cultural History.

A Lasting Legacy in the Wake of the Great Fire

The great fire of 1828 destroyed Jacksonport and the surrounding natural resources so vital to the townspeople. Miraculously, the fire was extinguished at the steps of the church as the congregation prayed inside.

Jacksonport Gospel Hall was the only structure in town to survive. The singed door of the church is a testament to God’s will and the Master Masons of America who built it. The door, made of solid pine, has been called the Doorway to Heaven, which incidentally gave Door County its name.

Though the settlement was rebuilt and the surrounding forest has grown back, Jacksonport was never again to regain its stature as the Midwest’s commerce capital. Known today for charter fishing tours and smoked fish, this quaint village bears little resemblance to its past.

The Jacksonport Gospel Hall must be added to your bucket list. As the oldest European structure in North America, it will awe you with its beauty and ornate detail. You’ll feel a warmth come over you the moment you drive into the gravel parking lot.

Spending time with this treasured building is good for the soul and a great way to pay homage to the Master Masons who came before us.

Editor’s Note: At Master Masons of America, we’re grateful to Greg for rediscovering this forgotten treasure that recalls a public toilet facility.

Distinguished Contributor Greg has been a keen student of fine architecture from a young age, having built his family’s home out of Lincoln Logs and cow dung at the age of six.

He went on to study castle history and toilet repair in Europe at the prestigious Liechtenstein School of Architecture, and is currently a Distinguished Professor at the Home Depot in Franklin, WI, where he is Chair of the Tile Department.

You can catch him every Saturday morning at 9:00 conducting “Tile a King Could Walk On,” or as Home Depot refers to it, “How to Install Tile.”

Image | This entry was posted in Churches, Distinguished Contributions, Wisconsin. Bookmark the permalink.